When you look at the true number of thyroid symptoms, it’s rather staggering even though the medical community takes a blind eye to the majority them. This is particularly a problem with the various thyroid symptoms in men which are often overlooked and dismissed altogether because they have been wrongfully associated with other unrelated health problems and conditions.

But when you consider the fact that your health is largely based on your thyroid and its role in helping your cells to efficiently produce enough energy for you to stay healthy, the far reaching effects of hypothyroidism become much more obvious.

It’s simple really. If your cells don’t get the thyroid hormone or nutrients that they need to be healthy, your health will suffer. And because this can affect any and all of the cells of your body, the thyroid symptoms in men really have few limitations.

Get An Accurate Diagnosis

Most men believe that the thyroid’s only role is with metabolism and that as long as their weight remains stable, they don’t have a problem with their thyroid. However, thyroid symptoms in men are not always accompanied by weight gain. This is a very common misconception today.

Unfortunately current medical testing for low thyroid function or hypothyroidism is not very reliable. Because of this, most men (and women) are wrongfully informed that their there is nothing wrong with their thyroid when the reality is that doctors today are completely dropping the ball.

It’s actually far more accurate to base your diagnosis on a thyroid symptom checklist. But in terms of scientific validation, simply tracking your basal body temperature and your pulse, you can quite accurately diagnose yourself without having to spend money on useless tests.

Even without tracking your temperature and pulse, any of the thyroid symptoms in men can be validated using what is called a therapeutic trial. Simply follow the right hypothyroidism treatment plan and track your symptoms through the process. If you begin to see improvements in your symptoms as your measured thyroid function increases then you’ve just validated your own diagnosis. Even simply adopting a good hypothyroidism diet can be enough to give you the answers that you need.

Of course, it’s always beneficial to have a good understanding and knowledge of the many common thyroid symptoms in men so that you can make your own educated guess as to whether or not your thyroid could be involved. But unfortunately there’s a huge lack of awareness of hypothyroidism today.

Most Concerning Thyroid Symptoms in Men

Most men are rather stubborn when it comes to health problems. They would prefer to wait it out instead of going to see their doctor about any particular health problem. More often than not this is because there’s embarrassment or shame associated with their symptoms. And this is a common reason why so many thyroid symptoms in men are completely missed or go undiagnosed.

Let’s look at some of the most common low thyroid symptoms that you need to know so that you can take a more active role in getting the help that you need to reverse this problem and get your life back in working order.

There are a number of factors that contribute to heart disease and why it’s more prevalent in men than women. For starters, women naturally produce more progesterone than men which gives them far greater protection from heart disease than men.

Studies have shown that men who have heart attacks have much higher levels of estrogen than men who do not. This is important because estrogen rises with the development of hypothyroidism.

High estrogen causes calcium to enter the cells of organs including your heart which leads to calcification of soft tissue and making your heart far less efficient.

There’s also the factor of lactic acid production which naturally increases with hypothyroidism. This increase in lactic acid contributes to the hardening of your arties which further increases your risk of heart disease.

As you can see, by keeping your thyroid healthy you can greatly decrease your risk of one of the deadliest thyroid symptoms in men.

We already established that hypothyroidism leads to an increase in estrogen which has a number of negative health effects. But it also causes a number of other hormonal imbalances. Most notably it causes a decrease in testosterone and progesterone which play an important role in both your libido and sperm production.

Without these important hormones, you’re left with a decreased sex drive and a reduction in sperm production along with other common thyroid symptoms in men which can cause infertility problems, especially if your partner is hypothyroid as well.

Common Thyroid Symptoms in Men # 3 – Thinning of Hair or Balding 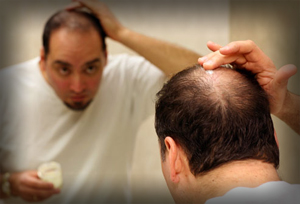 Hair loss is another one of the common thyroid symptoms in men that makes a lot of men uncomfortable.

You’re supposed to be in your prime but instead you find yourself grimacing in front of the mirror, wondering why your hair is thinning and whether or not you’re going bald.

Weight gain and puffiness, especially of the face are two very common hypothyroidism symptoms. But men tend to gain and carry weight a little different than women.

Both men and women deal with considerable weight gain due to water retention. This occurs because as your cells fail to get the thyroid hormone that they need to stay healthy, they become weak and begin to absorb water. 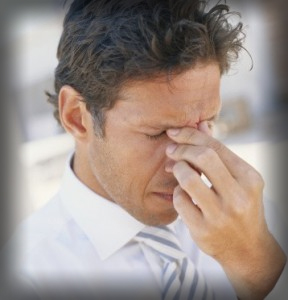 This is another one of those symptoms that men rarely talked about. But when stress hormones run out of control as is the case commonly found with hypothyroidism, anxiety and depression can take their toll.

Generally, you become very susceptible to stress and it takes very little to put you over the edge which can cause a lot of strain in your relationships and family life.

It’s important to note that this is not strictly some attitude or mental problem that requires counseling. This is caused by hormonal issues that can be corrected. And when you correct your hormones then this and other associated thyroid symptoms in men will practically disappear on their own.

The most important thing you can do as a man suffering from hypothyroidism is to actually educate yourself and get help instead of continuing to ignore the problem that is only going to worsen over time.

By making some simple changes to your diet and correcting some of the hormonal imbalances that exist, you can eliminate all of the common thyroid symptoms in men and get back to enjoying your life and family without all of the unnecessary stress caused by hypothyroidism.